Cotton T-Shirt Ignition at 6.5 ft from arc electrodes, 8 kA, 30 cycles. Snapshots before, during, and afther the shot. 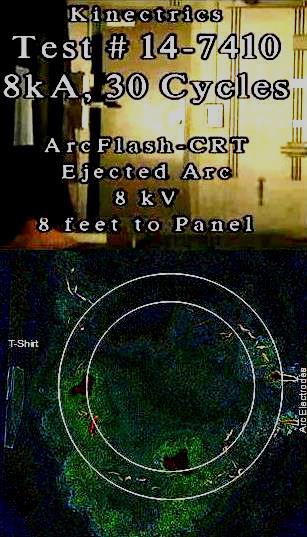 We should not neglect or underestimate the danger of two other types of electric arcs: arc in a low voltage enclosed switchbox and arc caused by personnel contact with energized parts. The first is also known as “arc-in-a-box” and the second is so called “tracking arc”.

Although, there is less total energy dissipated in low voltage arc-in-a-box, the accumulated thermal energy can escape only in one direction: through a mechanically failed or otherwise open door. Less emitted light energy is compensated by concentrated highly heated air flow.

Standardized test methods exist for two of four types of electric arc. There are currently no test methods for ejected and tracking arcs.

Arc Flash is the common name or nickname for an electric arc that takes place in electrical installation due to a dielectric insulation failure or a short circuit condition caused by human error or protective equipment failure/malfunction. From a physics prospective, an electric arc is an ionized conductive plasma column formed in the air between two electrodes; its temperature can exceed 5000°C.

In open air, an electric arc can stay within the arc gap or it can be ejected by electromagnetic forces from the gap into the adjacent space. In the first case the thermal  energy is distributed evenly in all directions.  In the second, the arc and its thermal  energy are ejected in one and only one direction. There can be a several times difference in heat energy received by personnel depending upon their position relatively to an ejected arc. In the example photographs, directionality of the arc resulted in non-FR Cotton T-shirt ignition at a distance of 6.5 ft away from the arc electrodes.

In the next photograph, the mannequin is even farther away (at 8 ft) from electrodes. Electromagnetic forces tend to shape the arc column as a circle with a 5-6 ft diameter. There was no ignition at this distance.

Prevention of arc flash events is the key and the top priority of electrical safety at work place. It is first line of defense.

However, burn trauma centers are still receiving patients injured in electric arc. And what would be the second or protection line of defense?

Which "domino" you would push first to have the “domino effect” that would lead to a reliable protection against thermal effects of electric arc. Is it a safety program? Or engineering study of your electrical system with arc flash capsulations? Or properties of a materials used for thermal protection? Or arc testing of PPE? Or the personnel training to lean what work practices are the best to avoid injury?

Well, may be just having a close look at the object of protection – electric arc itself. Latest results of research work, accident investigation show that not all arcs are “burn” even. There are different types of arc behavior that result in hazard differences. Knowing electric arc properties, we can better design PPE, test methods and work practices.